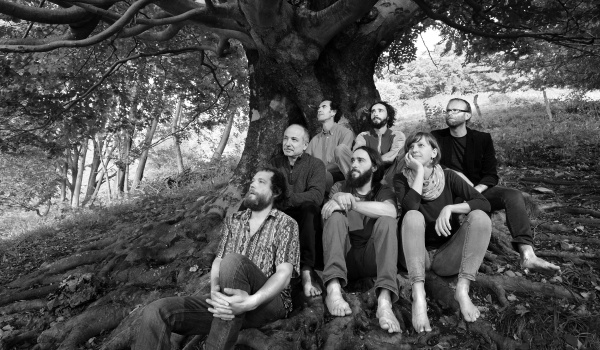 With the debut Pakašnca (2010), tandem Bakalina has surprised fans of unconventional music, which was, in their case, similar both to old folk tales and the engaged singer-songwriting. The singer and lyricist Jani Kutin and the accordionist Renata Lapanja has impressed the audience with the memorable melodies and poems written in the dialect of small town Čadrg. They tackles our everyday life in a critical and also humorous manner, from economy and politics, to bureaucracy and Europe, as well as love and intimacy. Following the sophomor release of Buohdidabra (2011) and the third album Žbrejnkl (2013) – all of their albums has been critically praised –, Jani and Renata decided to expand the band. In making the fourth album Španabije (2016), they invited some of the best Slovenian musicians from ethno, rock and jazz bands. We can find this widening of the band, which at the same time implies the widening of the musical expression, on this year's fifth album, Prvi krajec (The Moon's First Quarter), which was released on Easter. The original Bakalina duo has now transformed into a Bakalina Velika (Bakalina the Great) septet, where we find members of Jani's former alter-rock collective Salamandra Salamandra (Samo Kutin, Dejan Lapanja and Matej Magajne), as well as two new collaborators, percussionist Marjan Stanić and a Roman-Trieste trumpeter Andrea Pandolfo. As a guest vocalist, we will hear Bogdana Herman, the legend of Slovenian folk music.