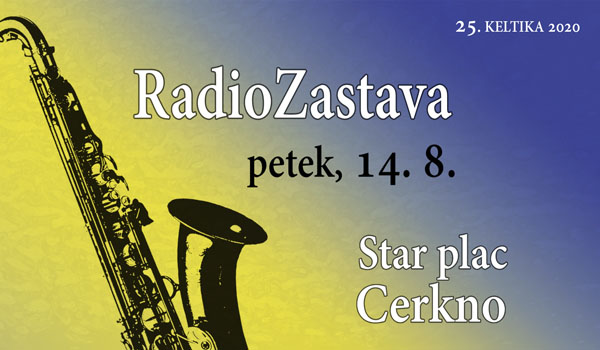 RadioZastava (IT)
a hot mix of Balkan, funk and rock

friday, 14 august, at 9 pm
Star plac, Cerkno; in case of rain the venue will be covered
Tickets: 7 € presale / 10 € at the concert
(limited number of tickets in presale, additional tickets on sale at the concert)

The eight-member brass collective of RadioZastava comes from Gorizia, Italy, and brings together musicians with Italian, Friulian, Austrian and Serbian or Bosnian roots. The band plays a hot mix of Balkan, jazz, swing and rock. They published their debut The Funambolik Heptet in 2008, and in 2013 they played at the famous meeting of Balkan trumpeters in Guča, Serbia, and took second place. On the second album Silentium (2013) they introduced electronics, which to this day remains important for the band’s sound. Thus, the spirit of experimentation and improvisation was added to the Balkan melodies with synthesizers, rhythm machines and theremin. A year after the release of the album, they performed as a support band on the European tour of Goran Bregović and Emir Kusturica. Last year, they released their third album, Insetti, on which they play even more with a mix of genres, from the unusual reworking of a theme by classical music oddball Eric Satie to electronic dance music. In addition to the aforementioned Guča, they have played at a number of prominent festivals such as Paradise Gardens (UK), Sherwood Festival (Italy), Den Radosti (Russia) or Jazz au Cellah (Morocco).