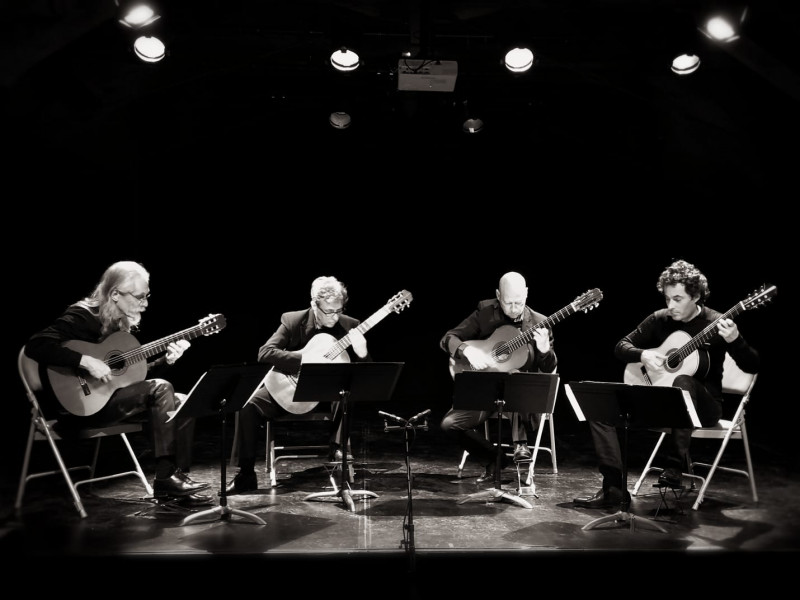 For more than three decades the Monte Carlo–basedAïghetta Quartet has been delighting audiences around the world with its eclectic concert programmes that transcend genre boundaries. The quartet debuted in 1982 with a performance ofJoaquín Rodrigo’s Concierto Andaluz for four guitarsand orchestra with the Monte Carlo Philharmonic Orchestra. This debut was followed by an extensive European tour, through which Aïghetta cemented its reputation as an ensemble with an innovative and fascinating sound characterised by a balance of voices sounding as one. The extensive list of concert and festival venues at which the quartet has performed includes the Teatro La Fenice in Venice, the Palau de la Música Catalana in Barcelona and the Salle Garnier in Monte Carlo. For its Ljubljana concert, the quartet has prepared a programme that includes works by lesser-known names such as the early-nineteenth- century Italian composer Ferdinando Carulli alongside arrangements of extracts from Rossini’s The Barber of Seville, Bizet’s Carmen and Kurt Weill’s The Threepenny Opera. The programme will also feature original compositions by members of the Aïghetta Quartet, who have become increasingly active as composersin recent years and whose works show the influences of jazz, flamenco, tango and classical music.