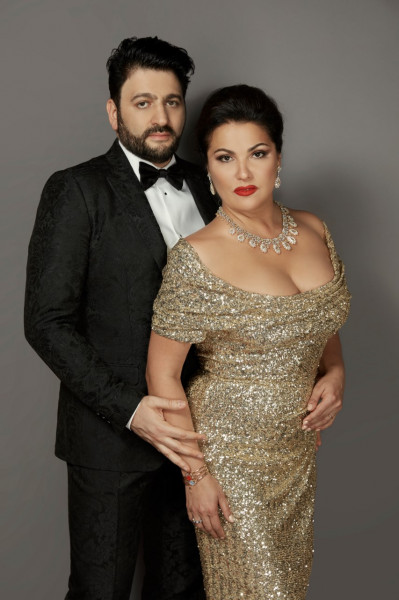 Anna Netrebko and Yusif Eyvazov have been an inseparable couple both in life and on stage ever since their first performance together in Puccini’s opera Manon Lescaut in Rome in 2014. The enchanting and charismatic Russian soprano Anna Netrebko, with her astonishing vocal abilities, thrilling tone and first-rate acting talent, is today an operatic idol. In recent years her varied repertoire has tended to focus on works from the late Romantic period, and her vocal maturity enables her to take on the central roles in the operas of Verdi. The Azerbaijani tenor Yusif Eyvazov began his international career with a sensational performance as Turiddu in Mascagni’s Cavalleria rusticana in Milan. This was followed by success after success around the world and he has become one of the most sought-after tenors of his generation. The iconic duo will be accompanied by the Slovenian Philharmonic Orchestra conducted by Michelangelo Mazza. The Italian conductor made his operatic debut with Verdi’s Falstaff at the Theatro Municipal de São Paulo in Brazil and quickly built an international reputation, further enhanced by regular collaborations with the international opera stars Anna Netrebko and Yusif Eyvazov at gala concerts in the world’s most prestigious concert halls.