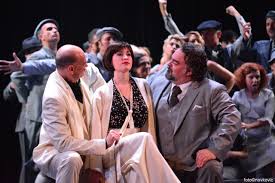 Zagreb’s Komedija Theatre has brought Countess Maritza by Hungarian composer Emmerich Kálmán to the stage for the fourth time. This jewel of an operetta is one of Komedija’s most successful productions and has been seen by a total audience of more than 150,000 since its first staging in 1954. In its latest incarnation, premiered in November 2019, it is enjoying similar success. Critics have written: “It maintains its jocular tone thanks to the first-rate protagonists of this comedy of manners and imbues the love story with the nostalgic air of old Hollywood glamour”. The romantic comedy tells the story of a headstrong, rich and utterly charming Countess with a sense of humour, who, in a desire to rid herself of the importunate suitors paying court to her because of her fortune, simply invents a non-existent fiancé. Unfortunately matters do not go quite according to plan. The operetta was written between the world wars (in 1924) and combines the Viennese operetta tradition with passionate Hungarian rhythms. Alongside waltzes and csárdás, the score includes a foxtrot and other music with an American feel. Almost a century after its premiere, the charms of Countess Maritza have not waned and if anything have even grown.