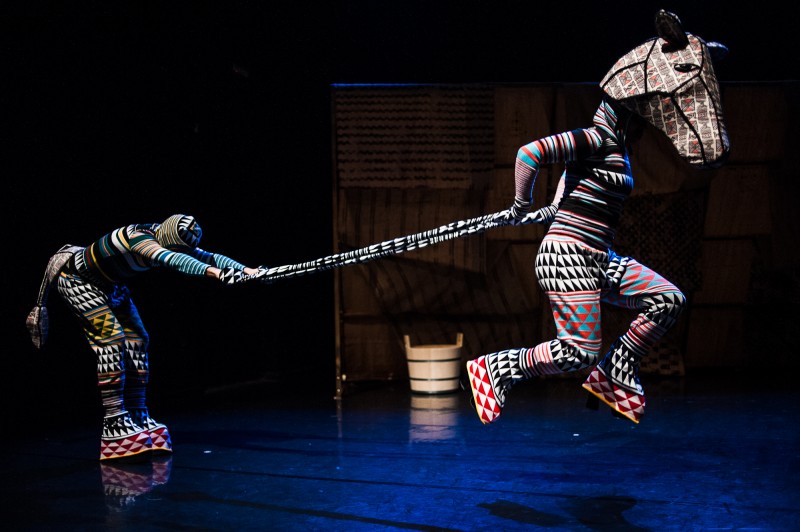 a dance-music-theatre performance for children

After the story by Tone Pavček

Winner of the "25 GOLDEN STARS" award at the Summer Puppet Pier 2014 in Maribor, winner of the "GOLDEN LAUREL WREATH" award at the 54th International Theater Festival MESS in Sarajevo and Quality Label at the 16. Golden stick festival in Ljubljana

Anyone who does not already know the story about Juri Muri, about a boy who fell from a pear tree, is too young and will soon learn about it. Juri Muri does not want to bathe and escapes to Africa, where he realizes that a man "... can find a hospitable and open people who accepts him and teaches him what in life is right and what is wrong, what is delusion and what prejudice, and ultimately how important it is to be a role model of cleanliness, not only the bodily, but as well that inner cleanliness which weaves the true bonds of friendship." says Saša Pavček about the story by her father.

With the help of African rhythms, live music, puppets of unusual size, and a lot of dancing we'll tell you a bit about geography, colors and differences in this world.

Ivana Djilas is a theatre director who directed more than forty plays in all Slovenian professional theatres. More than half of those are performances for children and youth.

Her work is very diverse, from classical theatre, puppet shows, music, to dance theatre as well but always with a distinctive poetics of a director, whose handwriting is clearly identifiable. She likes modern drama, Slovenian and foreign but she does not direct performances always from dramatic proposal, but also adaptations of novels, picture books, poetry, she also dramatized a column from a newspaper. Performances for children have always been her great love.

She has received important awards for her work including the Maribor Theatre Borštnik Award for directing the performance The Private Life at SNG Drama Ljubljana (2010).

"Judging by the enthusiastic response of the youngest audience Juri Muri will often depart on this excellently performed warm, witty and colorful adventure." (Mojca Kumerdej, Delo)

"The performance Juri Muri in Africa, this art, dance, music and picturesque fullness and nothing less performing perfection should not be missed!" (Daliborka Podboj, Parada plesa)