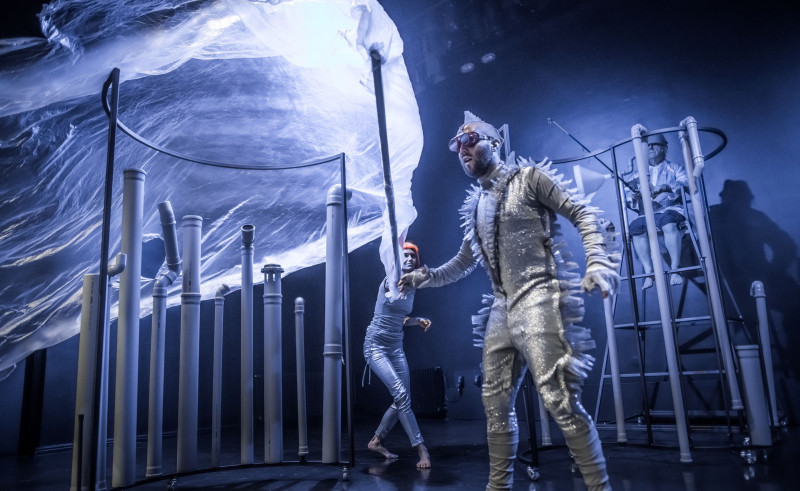 a dance-theatre performance for children 4+

Thanks to: URŠA KODELA LAPAN

Ambrož lives in a world where there are no machines, no factories, and no shops. Everything he needs grows and floats in his lake. To pass the time, he annoys fishermen and plays with aquatic animals and objects thrown into his lake by land people. But when a shoe falls into the lake, which is different from the one already lying at the bottom of the lake, Ambrož suddenly remembers that his parents, before leaving him and moving to warmer waters, told him to find a wife to continue their family line. But where to look for her? There are far fewer water people than there are land people, and Ambrož does not know a single water woman. So he heads to the mainland, where the world is very different. The people there wear clothes, drink strange liquids instead of water, and do things that are completely incomprehensible to Ambrož. In order not to be afraid of him, he has to wrap himself in their clothes and pretend to be one of them. But even so, he does not dare to approach any land woman. Until one of them asks him to unclog her drain, through which she releases all the dirt from her house straight into the river. It doesn’t feel right to Ambrož, but if he wants to win her over, he has no choice but to help her. However, when he dives into the river to unclog the drain, he meets someone who doesn’t agree at all with his help in poisoning the river.

“The performance Water man Ambrož entertains and encourages children's curiosity and creativity. After all, children on stage follow many useful objects that accumulate everywhere in the waste areas, and with them a lot can even be built, as was observed on stage.” Daliborka Podboj, Parada plesa

“The dance-theatre performance rewrites the theme of the Water Man in a completely new manner, as a love story with an ecological and social note. It outlines the basic storyline with concise narration, and dedicates the stage primarily to the richness of staging forms, forming a dynamic and multi layered stage entirety characterised by playfulness in terms of movement, sound and visuality. The creative use of scenographic elements and sounds, accompanied by the diversity of impulses and associations in the choreographic and visual identity, support the creative perception of artistic expressions with which the performance depicts Water Man’s journey and life and relationships in the underwater and terrestrial world – full of imagination in motion and with relevant references to the problematic aspects of our society.“ Nika Arhar, Martina Peštaj and Adriana Gaberščik, expert committee of the Golden Stick platform