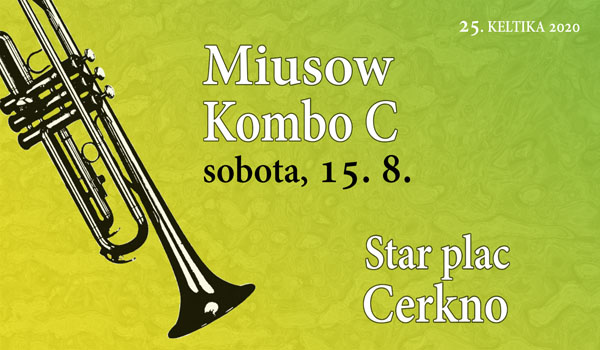 saturday, august 15, at 9 pm
Star plac, Cerkno; in case of rain the venue will be covered
Tickets: 7 € presale / 10 € at the concert
(limited number of tickets in presale, additional tickets on sale at the concert)

The final event of the summer Keltika concert cycle will also be an introduction to Jazz Cerkno, which will take place this year from 17 to 19 September. There will be two local jazz bands, each of which is connected to our festival in its own way. Andrej Čopar, who conceived the concept of the ever-changing band Miusow, performed at our festival in 2004 with a solo version of this project. Zlatko Kaučič, mentor and artistic director of Kombo C, has been present at the Jazz Cerkno Festival from the very beginning. This time, the percussionist will present the third version of the ensemble, created as a result of his music school. Kombo C brings together the youngest generation of local musicians who, under the auspices of KUD Zvočni izviri and Kaučič's leadership, are learning to "create music outside the clichés of modern popular production". Kombo C music draws from jazz, rock and improvisation; although it is mostly based on a strong groove, there are plenty of surprising twists to be found in it. The band released the acclaimed album Petelin iz Noznega last year. The Miusow concept was first created as the aforementioned Čopar’s solo project; later the Miusow Quartet was formed, which in 2007 released the album Smejmo se skupaj. In addition to Čopar, the current quintet (which now bears the simple name Miusow) also includes Blaž Grm from the previous quartet, whereas the other members are well-known players from Slovenian jazz and experimental scene. If the first ensemble skilfully played with the premises of art jazz, the rejuvenated quintet boldly moves between acoustic and electronic music and slightly ethereal jazz and experimental interventions.