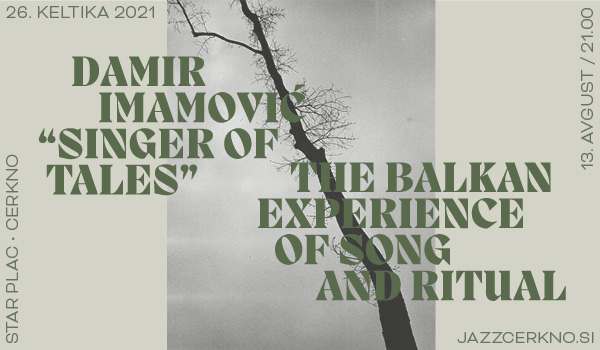 sevdalinka for soul and heart

The Balkan Experience of Song and Ritual (SI)

After having his premiere Slovenian performance at Jazz Cerkno festival in 2008, Damir Imamović, one of the most prominent representatives of “New Sevdah”, is returning to Cerkno. He initially played traditional Bosnian songs solo, accompanying himself on guitar. Later, he led various ensembles, such as Sevdah Takht, in which the Sarajevo violinist Ivana Đurić also played, with whom he will perform this time. At the concert, he will present songs from last year's highly acclaimed album Singer of Tales, which was released by the renowned British label Wrasse Records and which this year brought him the prestigious "The Best of Europe" award from the British magazine Songlines. The concert will be introduced by the Slovenian quartet The Balkan Experience of Song and Ritual, which plays Balkan music in original arrangements. The group consists of three experienced female singers and a percussionist who present folk music from Slovenia to Turkey with modern approach. The traditional line-up (polyphonic singing and percussion) seeks a more modern expression for old songs, adding improvisational and narrative moments to them and thus bringing them closer to the present. In 2020, the band self-published the debut Initiation with adaptations of well-known Balkan songs with an emphasis on the Macedonian tradition.