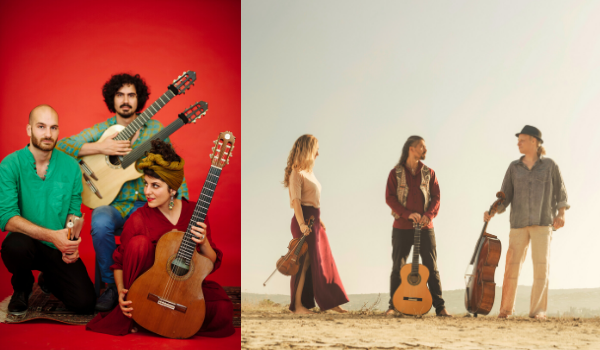 friday, july 17, at 9 pm
Star plac, Cerkno; in case of rain the venue will be covered
Tickets: 7 € presale / 10 € at the concert
(limited number of tickets in presale, additional tickets on sale at the concert)

At the double concert, we will listen to two international line-ups, each of which is trying to revive and update different traditional music. The Golnar & Mahan moniker stands for singer Golnar Shahyar and guitarist Mahan Mirarab, who are joined for concerts by percussionist Amir Wahba. It is an Iranian-Austrian combination that has been operating since 2011, when Shahyar and Mirarab met and embarked on a joint musical journey. They explore the rich Persian musical heritage, adding elements of acoustic jazz with a distinct subtle intertwining of the sounds of two acoustic guitars and the suggestive voice of the vocalist. The Wild Strings Trio brings together musicians from Slovenia, Slovakia and France, united by a love of merging traditional music and jazz with an emphasis on hot-blooded improvisation. The trio has been active since 2014, when Slovak jazz violinist Petra Onderufová, French classical cellist Toby Kuhn and Slovenian ethno guitarist Aleksander Kuzmić met. Their mostly original compositions are built around Oriental, Celtic and other traditional music, to which they add elements of jazz and classical music.