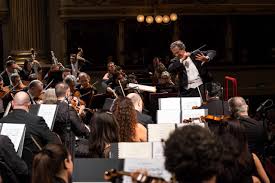 The closing concert of the Ljubljana Festival brings some of Italy’s finest musicians to the Slovenian capital. The La Scala Philharmonic Orchestra was established in 1982 by Claudio Abbado and the musicians of the Teatro alla Scala in Milan, with the objective of developing a symphonic repertoire in order to add a further dimension to La Scala’s great operatic tradition. The orchestra’s first conductor was Carlo Maria Giulini. He was succeeded by Riccardo Muti (principal conductor from 1987 to 2005). The orchestra works closely with conductors from La Scala, including Riccardo Chailly, Daniel Harding, Daniele Gatti and Valery Gergiev, the last of whom is an honorary member along with Georges Prêtre,Lorin Maazel and Wolfgang Sawallisch. Fabio Luisi is music director of the Dallas Symphony Orchestra, general music director of the Zurich Opera and principal conductor of the Danish National Symphony Orchestra. He is a recipient of the Bruckner Ring (awarded by the Vienna Symphony Orchestra) and a Cavaliere Ufficiale (Knight Officer) of the Order of Merit of the Italian Republic. Alessandro Taverna has won major prizes at the Minnesota Piano-e-Competition, the London International Piano Competition, the Leeds International Piano Competition and the Busoni Piano Competition in Bolzano and his performances have impressed critics and audiences throughout the world. Critics have hailed him as the “natural successor to his great compatriot Arturo Benedetti Michelangeli” and have said of his music-making that it “stimulates the senses as does a visit to his native Venice” and “gives rise to a feeling of wonderment”.