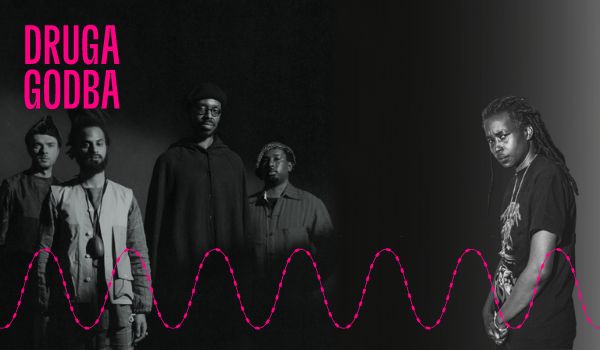 What more can we say about Sons of Kemet? Right from the release of their debut album and their appearance at Druga Godba 2015, one of their first in mainland Europe, their trajectory has been ever upwards – to the point where they are now the planet's most influential danceable jazz group. Most of the credit for this goes, of course, to relentless leader Shabaka Hutchings, whose musical vision and youthful approach, which takes in Afro-Caribbean rhythms, Ethio-Jazz, free jazz and dub, have revived the London jazz scene and encouraged thousands of young followers to take to the stage the world over. Shabaka has made jazz cool again, be it with the hybrid project The Comet Is Coming (who can forget their monstrous performance at a packed Kino Šiška in February 2020?), The Ancestors or Sons of Kemet, who are the most rhythmically grounded of the three. In only a few short years, Sons of Kemet have produced more hits than most other bands manage in a lifetime. Their fourth album, Black to the Future, which came out last year on Impulse/Universal, brought together a crew of top vocalists. Among them was the multi-talented and charismatic Moor Mother, who will, you can be sure, join the group on stage for the superb 'Pick Up Your Burning Cross'. After that, anything is possible. It's as clear as day: anyone who manages to weather this dance storm to the end will live for 100 years.

Hip-hop and Druga Godba have been best friends since way back – 1995 to be precise, when The Roots, the first US artists of the genre to come to Slovenia, made their legendary appearance at the festival. Like The Roots, Moor Mother comes from the creative hotbed of Philadelphia, but she is much, much more than a hip-hop artist alone. She's a poet, a visual artist but, above all, a visionary of a utopian world, something that, particularly now and particularly among African Americans, other socially marginalised groups and indeed anyone under the age of 30, is the only remaining hope. It's here that she shares an Afrofuturism aesthetic with Shabaka, and although she uses other means of spreading her ideas, they are essentially united in music, the most universal way of sending messages out to the world. Moor Mother's voices guide us through this strange and unknown modern world of apathy and indifference, and her commitment to performance and her intellectual charge remove any doubt that art is the most glorious state of being. Her most recent album, Black Encyclopedia of the Air, was released in 2021 and made it to the top of Radio Študent's list of the best international albums of the year. This will be Camae's second appearance in Ljubljana, following her performance at the Stiropor festival in 2017.

'Like a blossom emerging from between the floorboards of a slaughterhouse, Moor Mother’s music is an act of transcending a violent, intolerable present' The Fader

The Festival Pass (46,00 EUR) includes all concerts  within the consolidated program of the Druga Godba festival, which will take place in Ljubljana from 24 to 30 May. A limited number of Festival Passes will be on sale while stocks last.